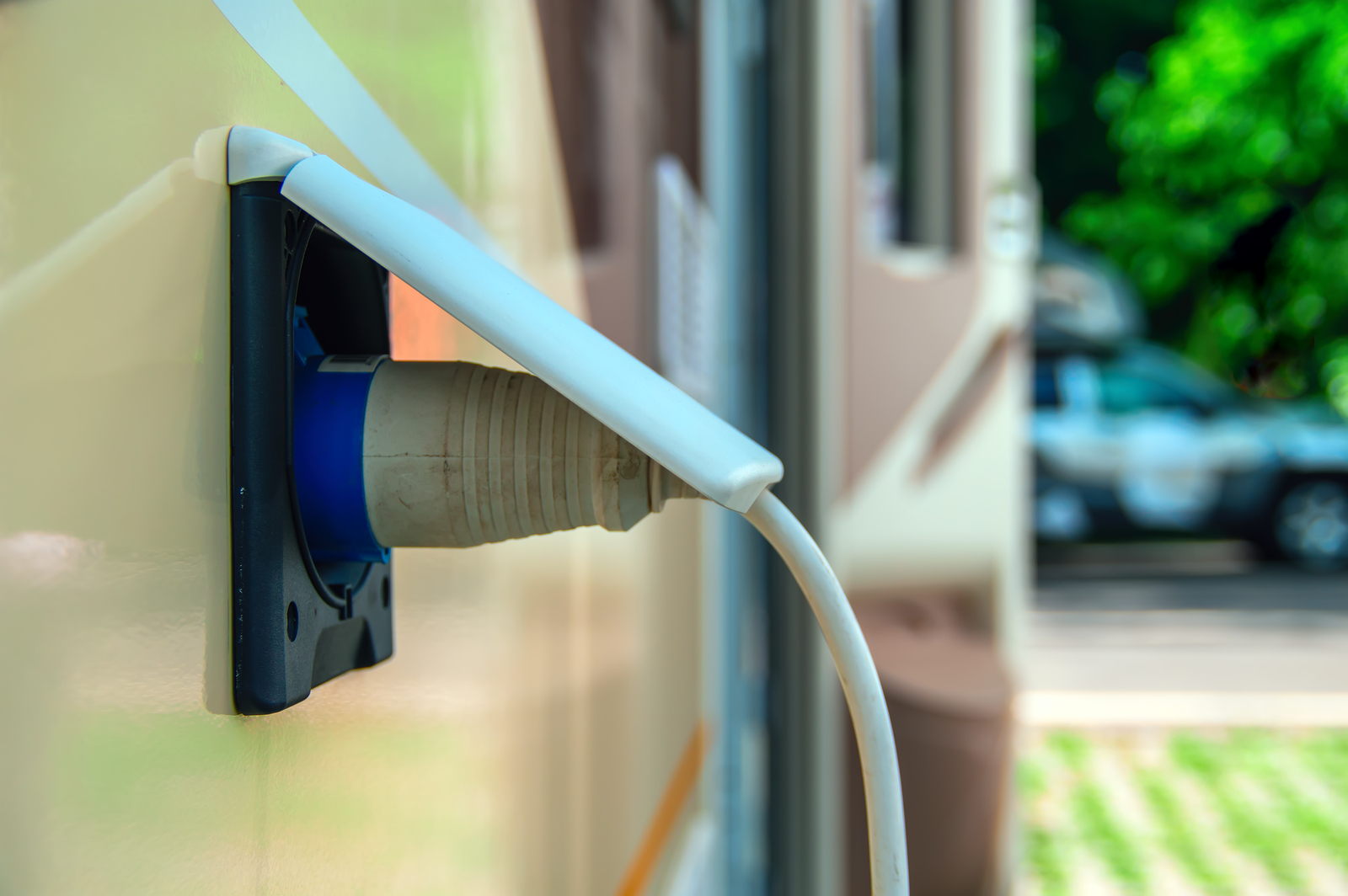 There’s nothing worse than an electrical problem to bring your RV road trip adventure to a halt. It can be overwhelming, and the whole idea of having an RV instead of traditional camping is to have all of the amenities of home.

How Many Electrical Systems are on an RV?

There are two 12-volt systems and a house 120-volt electrical system. Here is a little more information on them.

This system consists of deep cycle batteries that provide power to all of the 12-volt lights, water pump, the circuit board for all of the appliances, slide outs, leveling jacks, and propane detector. To maintain the charge in these batteries, the RV has a converter just like a car that converts the 120 volts to 12 volts.

This 12-Volt system’s power comes from the chassis batteries that power the stop lights, turn signals, and exterior lights of the RV. This current runs through the seven-way pin connector on a 5th wheel or trailer. For a motorized RV, the power is generated from batteries that are connected to the alternator exactly like your car.

The 120-volt AC (alternating current) system is like the one in your permanent residence. This system powers the air conditioners, the heating element of the hot water heater, microwave, the converter, wall receptacles, and all other accessories that require a 120-volt system to run.

What’s great is that most of the electrical appliances have their electrical requirements on their labels such as the watts, volts, and amps. So, what are amps, watts, and volts and how do you figure out what your maximum usage on the RV is? Read on.

Here is a brief Physics lesson on amps, volts, and watts. A volt essentially “pushes” the electricity through the wires of your electrical system. You could compare it to the water pressure in your plumbing. It’s the electrical capacity.

The electrical flow is called an amp. Its much like the amount of water flow in your plumbing system. How much amperage your system can handle depends on the length and size of the electrical wiring. Pushing too many amps through underrated or smaller wire makes the wiring hot.

So, the resistance to flow causes restriction that builds up heat as the current flows through the wiring. Fires can occur when too much amperage overheats the wiring and melts the casing.

The watts are how much power your electricity has. Here is a bit of an equation. If you have 30 amps of main service in your RV and 120-volts running into it, you will multiply those two numbers to get the number of watts. So, 120 times 30 equals 3600 watts. Now what?

Say you had your RV plugged in at home with several electrical appliances turned on. Once you unplugged your RV for traveling and then arrived at your destination, you plugged it back in. Let’s see if we know what is going to happen when you plug back in, and all of those appliances turn on at once.

That means that 5,160 watts flood the circuitry and because you only had 3,600 watts of power to use, the breaker tripped. That’s a simple Physics lesson to help you understand your RV’s electrical system a little better.

The Difference Between Minor and Major Electrical Problems

Even a beginner can learn how to inspect their RV for electrical issues and decide if it’s minor or major. Whether you rent or own your RV at least make a quick inspection of it before you start your road trip.

Here is an example of a minor problem that you can fix yourself. If the GFI has “kicked out” or you’ve tripped the breaker when you had all of those appliances listed above plugged in, the fix could be a simple as replacing a fuse or resetting the breakers. Most people can check the water in the battery or figure out that there are too many appliances left on. Thus, the problem is easily solvable.

Now, if your refrigerator stopped working, then you may have a significant problem. Should you inspect the propane management circuitry and wiring on the back side of your refrigerator? Probably not. As someone with little electrical wiring knowledge, you should not attempt repairs like this yourself.

It’s not safe. Instances such as these are the times to contact an electrician. A qualified technician knows what to look for and how to solve any electrical problems as efficiently as possible.

Before you start messing around with the electrical system or opening the panels in your RV, heed these warnings.

Here is some general information on the electrical system in your RV to help you troubleshoot some common electrical problems. First, your RV contains many electrical devices that are built-in. There are complicated protection circuitry and electrical controls designed with the safety of its inhabitants in mind.

Three different power sources work alone or together to run all electrical products in the RV.

DC power runs from the batteries on the RV. The converter charges up the power in the batteries when it gets low. It does this by taking the AC power that’s a higher voltage and converts it over to 12-volt DC power. This converter is sometimes referred to as the inverter.

However, “inverter” is actually the name of another device that does the opposite: converts the DC power to AC current for other appliances such as your television.

AC current comes from your RV’s generator or other outlets at the campground that you plug into. It provides either a 20, 30, or 50-amp supply. The control panel for AC power disperses its electricity to all of the outlets and appliances that run on AC. Campgrounds supply two different wires for AC current. They split a 240-volt supply into two lines of approximately 115 volts.

Typically, the output of your 12-volt converter runs through two 30-amp fuses that supply the 12-volt fuse panel. From there it feeds into all of the slides, switches, lights, etc.

Problems can occur in either one of these systems because RVs vibrate when traveling. These vibrations can shake electrical connections loose. These problems are in addition to the general wear of the appliances and wires that develop during use.

Sometimes current runs somewhere that it’s not supposed to shorting out a circuit. This electricity flow can cause a fire, injury, or burn out appliances and wires. Sometimes the insulation shake rubs off of a wire. Other problems arise when something inside an appliance burns out or shakes loose.

Either of these issues can halt the flow of electricity in any of your electrical systems.

As a safeguard against injury and fore. The RV has fuses and breakers that shut the electricity off if any problems happen. In addition to the breakers and fuses for the AC and DC systems, there are Ground Fault Circuit Breakers (GFCBs) or Ground Fault Indicators (GFIs) in most 110-volt electrical receptacles that shut off the power to appliances plugged in if a circuit or wire shorts.

The Chicago World’s Fair of 1893 marked a significant victory for Nikola Tesla when his proposal to run the electricity for all of the lighting there with AC won the contract because it was more cost-effective and efficient than Thomas Edison’s DC. Many people say that it’s the reason our home electrical systems are run by AC current instead of DC.

Sometimes the solution is simply the format of your power usage such as what appliances are plugged in, where they are plugged in, and if they are left on. One of the best resolutions is to remember to turn off the appliances when you unplug the RV or shut off the main power. Only turn electrical devices on when you need to use them.

Don’t use any electrical appliances unless you’re sure what their power requirements are. That goes back to the equation we discussed earlier: Volts X Amps=Watts.

Don’t upgrade your breaker or fuse with one that’s higher-rated to repair the problem. Professionals designed your RV for maximum safety, and there is a reason that they installed each device with a specific electrical line. Upgrading your breaker or fuses won’t solve any problems.

It will only create them. You could permanently destroy your electrical equipment, or worse yet, burn your RV down because of an electrical fire.

Fuses were designed for a regular and safe operational load, and if it blows, something with the electrical current changed.  Here is a list of fuse ratings and colors in case you need to replace one.

This article only touches on the basics of the electrical systems in your RV. There’s a reason that electricians take years to become masters and have extensive on-the-job training. Electricity is dangerous and tricky if you don’t fully understand its basic concepts.

Now, just because your electrical comprehension is elevated by the posted doesn’t mean that you have the skills necessary to re-wire your whole RV. Always be careful when checking for problems with the system. Remember to check the energy requirements of your appliances before you pluck them in.

Also, purchasing an electrical management device to check the electrical pedestals at RV campgrounds is an excellent idea. It will let you know of any electrical issues with the power source before you plug your RV in and damage your electrical system or devices.

Some things are easy to fix such as replacing a fuse or checking the breaker. More complex problems should always be evaluated by a qualified electrician or someone your RV manufacturer chooses. Keep these things in mind and have a safe time traveling in style and comfort in your RV.